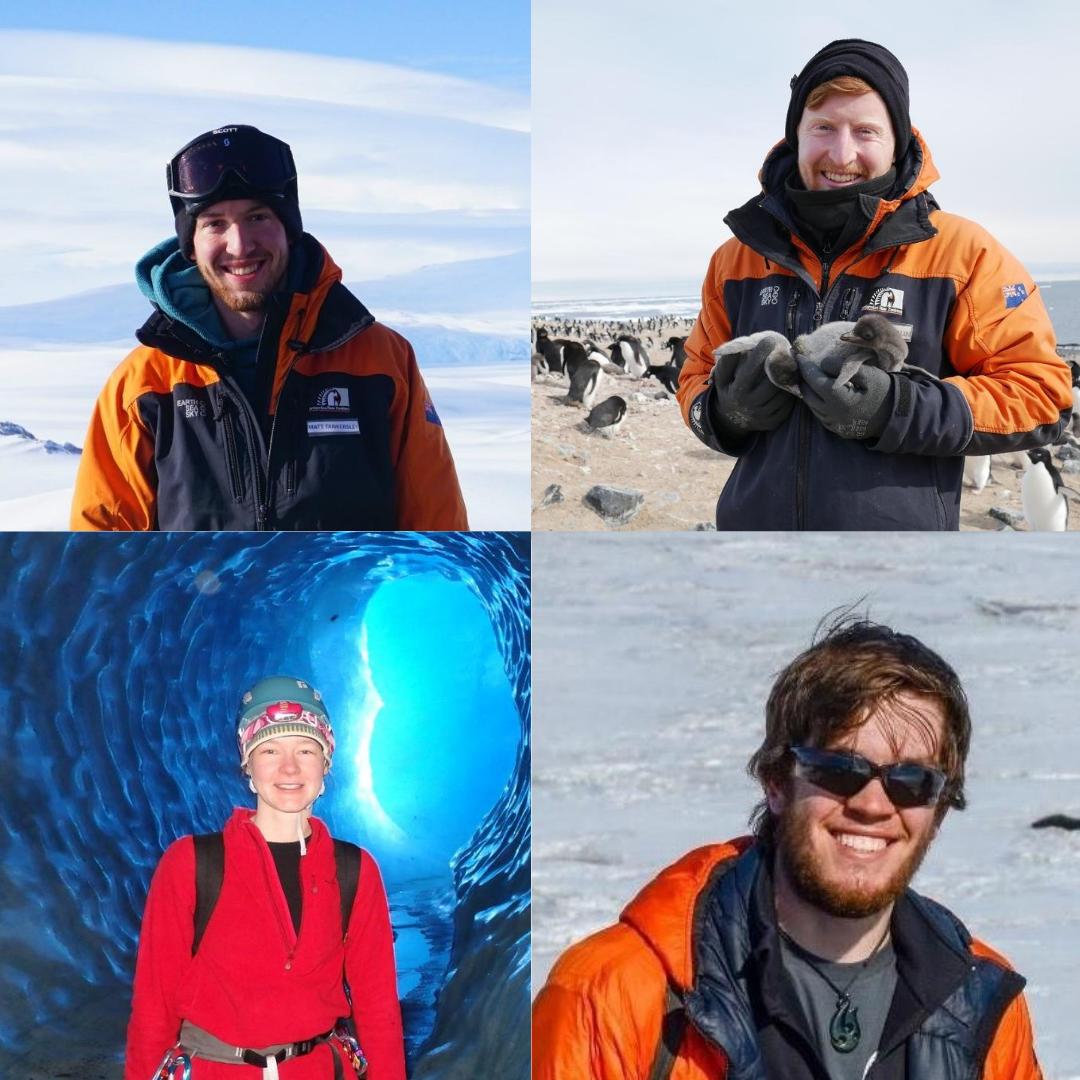 From research into Antarctica’s Adélie penguins, to studying an ice stream more than 1000 kilometres from Scott Base, Antarctica New Zealand is thrilled to announce the four recipients of this year’s scholarships.

“Through these scholarships, Antarctica New Zealand is committing to expanding New Zealand’s Antarctic Science expertise and supporting the next generation of Early Career researchers.

“These scholarships are highly competitive, and each year we receive numerous applications from some of the brightest upcoming Antarctic research stars," he says.

Matthew, from Victoria University of Wellington and GNS Science has received an Antarctica New Zealand Doctoral Scholarship that includes $20,000 of funding over the next two years.

He is using previously collected data to examine the depths to the sea floor and study the geology beneath the Ross Ice Shelf. The sea floor depth controls where warm ocean water can melt the ice shelf from the bottom. Matthew will also assess the amount of heat transmitted to the base of the ice sheet from the ground beneath. This heat melts the ice and the resulting meltwater lubricates the ice base, increasing the flow of ice from land onto the ice shelf.

This research will give ice and ocean scientists the information they need to model how the Ross Ice Shelf will respond to a changing climate. The ice sheet is the ice that sits on the land in Antarctica, the ice shelf is an extension of the ice sheet that floats on the ocean.

Matthew says he is honoured to receive the scholarship.

“I was fortunate enough to visit Antarctica this past season for eight weeks of field work on the Ross Ice Shelf. Living and working in that unique environment has given me a deep appreciation for Antarctic research and all the people contributing to it.

“I’m in the early days of my Antarctic-related research, but with the incredible support I’ve received so far from Antarctica New Zealand, Victoria University of Wellington, and GNS Science, I anticipate a long career in this field,” he says.

Theo, also from Victoria University of Wellington, has received the New Zealand Post Antarctic Scholarship for supporting his master’s degree. This includes $10,000 of funding, for one year.

He is using information collected from sediment cores from beneath the Ross Ice Shelf to better understand ice stream behaviour at the Kamb Ice Stream. The Kamb Ice Stream flows from West Antarctica into the Ross Ice Shelf almost 1000 kilometres from Scott Base at an area known as the Siple Coast. This research will contribute to understanding how the ice shelf will respond to climate change and contribute to sea level rise.

Theo says the scholarship enables him to focus on the exciting job of analysing sediment from under the Ross Ice Shelf, which is one of the least studied areas on Earth.

“Having this support from New Zealand Post and Antarctica New Zealand at the early stages of my research career means a huge amount, and I’m grateful for the opportunity to further our understanding of how the Ross Ice Shelf will respond to climate change.

“The Siple Coast ice streams play an important role in the stability of the West Antarctic Ice Sheet, so improving our understanding of the processes operating there is both important and rewarding,” he says.

Holly, from the University of Otago, received an Antarctica New Zealand Doctoral Scholarship, which is $20,000 of funding over the next two years.

Her research focuses on the flow behaviour of ice near the margin of Priestley Glacier. Using a combination of field data and laboratory experiments, Holly’s research aims to improve the description of ice flow implemented in large-scale ice sheet models. This research will contribute to improved projections of rates of ice sheet change in response to climate warming.

“This season we were able to collect ice core samples, seismic data and surveying data from the Priestley Glacier’s shear margin.

“The shear margins of Antarctic glaciers and ice streams are largely unsampled because the ice experiences shearing and stretching with zones of crevasses forming, which can make fieldwork more challenging,” she says.

Taylor, from the University of Otago and Manaaki Whenua Landcare Research, has also received an Antarctica New Zealand Doctoral Scholarship that includes $20,000 of funding over the next two years.

His research focuses on the feeding habits of Adélie penguins at Cape Bird, through tagging adult birds and observing chick growth. This research will investigate important feeding locations for the penguins, and further our understanding of the factors that influence breeding success. This research will also contribute to informing how effective the Ross Sea region Marine Protected Area is, which is the largest Marine Protected Area in the world.

Taylor says he feels very lucky to be working in such a unique environment studying penguins.

“The study of Antarctic penguins provides us an opportunity to understand and better protect these beloved species that regularly feature in our day-to-day lives.

“From our TV screens to the front of our chip packets, penguins are widely considered sentinels for their environments and investigating how their breeding and foraging behaviours change can provide insights into the current health of the marine ecosystem which can shape nearby fisheries management, and then what effects future climatic shifts may have," he says.

For more information please visit the scholarships page on our website